ROCHELLA’S JOURNEY FROM MALE TO FEMALE

I am so grateful to see many different people from all walks in life at my Yoni whisperer Bodywork studio.

Last week I was very fortunate to meet a transgender client called Rochella – her name has been changed to protect her client confidentiality. Rochella had been classified as male when she was born and had lived unhappily for much of her life having to identify as male, until 2015 when she began to transition and present as her true gender. In March this year (2019) Rochella travelled to Bangkok, Thailand for gender reassignment surgery (GRS).

We sat and chatted for quite a while, as I like to get a comprehensive medical and health history from my new clients and of course, I was very interested in Rochella’s story.

Rochella booked a Yoni Whisperer Bodywork session with me to learn about her new female body.

On meeting Rochella at my front door, well she looked absolutely amazing! She was tall, she had a beautiful full head of hair, makeup, fingernail polish, a dress, a handbag and sandals. I was amazed at her transformation as she showed me pictures of herself from when she was presenting as male.

We spoke at length during Rochelle’s Yoni Whisperer Bodywork session. Rochelle said she had absolutely no regrets about transitioning or having gender reassignment surgery. She clearly loves being a woman and feels much more at home presenting as her true self. 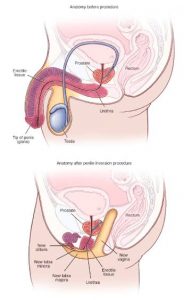 Rochella said her surgery took around 5 hours, she spent 4 days with her genitals wrapped in bandages and she experienced 7 days with a catheter inserted into her bladder. She said she was discharged from hospital after 4 days and had to return to have her catheter removed. Rochella said that she spent three weeks all up away from Australia, much of it in a lot of pain. I could understand why she might fear exploring the potential of her new Yoni.

Rochella had to wait one month, before she could start using dilators, to keep her new vagina open, while she healed. She said she was discharged from hospital, with 4 dilators of different sizes. To begin with, she had to use these daily, but she now feels that once a week is sufficient.

Prior to Rochella’s Yoni Whisperer appointment, I took the time to research her surgical procedure. I understood it was huge experience, for her, emotionally, physically and mentally.

An incision is made into the scrotum, the testes are removed and the flap of skin is pulled back. Surgeons also create a clitoris (clitoroplasty), usually from the highly-sensitive glans found at the tip of the penis.

When Rochella felt comfortable, I left the room while she disrobed. Upon returning, I draped her with towels. I do this with all my female clients, I feel it important because most women can feel nervous and vulnerable being naked.

Yoni Whisperer Bodywork (YWB) session started with a relaxing massage. The goal of all YWB sessions, is to completely relax my female client, so she can feel the many different sensations of receiving intimate one-way touch.

Rochella experienced being fully present in her body, we explored the importance of consent and learning to honour her boundaries in her new female body.

Many women shut down their sensual selves, and are unable to reach orgasm, if they have not had their personal boundaries honoured.

Humans close down, when they haven’t given permission to be intimately touched, kissed or hugged. Women can shut down their libido, their sexual desire and their orgasmic potential, when they are touched by another person, who has taken liberties and not asked for permission. Honouring our personal boundaries is extremely important.

It is really important for a woman, to know exactly what she likes and how she likes her body to be touched.

Rochella’s YWB session, was a completely new experience for her to learn about  personal consent, to learn to ask for what she likes and to verbally consent, or withdraw consent, if she was touched in any way, whatsoever, that she did not like.

Once Rochella was completely relaxed, I ask permission to give her a Yoni Massage.

It was absolutely amazing, witnessing Rochella’s sensual response, to having her labia majora (outer lips) and labia minora (inner lips) massaged. Rochella’s clitoris was very sensitive and her response to external vulval massage, was very stimulating and highly arousing for her.

Once Rochella felt ready and comfortable, I asked permission to orgasmically map her new vagina.

Wow, what a mind blowing experience. Rochella discovered that she would easily feel pleasure and she was highly responsive to orgasm.

While witnessing Rochella’s first intense vaginal Kspot orgasm, I then saw the largest smile of pure happiness light up her whole face and then Rochella said – “golly I never knew female orgasm could feel like that!”

I asked Rochella if she would like to experience more? She was wildly amazed, that she could experience orgasm, in all the places that I awaken and stimulate orgasm, in the female vagina.

At the end of her YWB session, Rochella had a smile from ear to ear, she was so unbelievably happy and felt confident in her new body. Rochella said “I had no idea, that the female body could be so orgasmic and that I could experience so many different kinds of orgasms!”

At the end of her Yoni Whisperer Bodywork session, Rochella got dressed and we had a conversation about the different types of vibrators which she may like to purchase.

We talked about the Female Multiples Makeover techniques, that I orgasmically coached her into and about the importance of breath, focus, kegels and sound to spread orgasm into every cell of her body and into her Auric / Luminous Energy Field outside the human body.

For me, I just feel so very fortunate, grateful and thankful to the universe, that I have the opportunity, to work with people, who have had Gender Reassignment Surgery.

This blog was written by Aleena Aspley on 22 November 2019 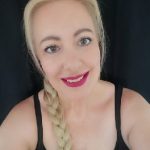 * Rochella – Client confidentiality is extremely important to me, and Rochella is a similar name to the real name of the female gender reassignment client that I saw.

* Gender-reassignment surgery (sometimes called gender-confirmation surgery or gender-affirmation surgery) is one way (but not the only way) that individuals with gender dysphoria transition from their birth gender to their desired gender.

* Transgender – denoting or relating to a person whose sense of personal identity and gender does not correspond with their birth sex.