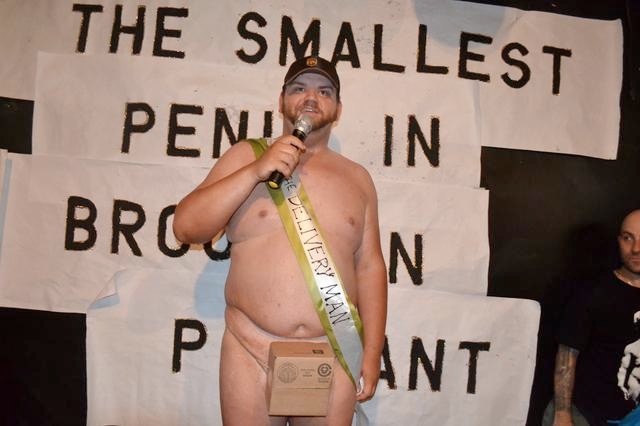 On Saturday, a Bushwick bar held a contest to crown the “smallest penis in Brooklyn.” The winner, Nick Gilronan, actually resides in Queens, but that didn’t stop him from walking away with the title and $200 cash. In this exclusive interview, he opens up about his junk and blasts the media for making less-endowed men seem inadequate. Single ladies take note: Gilronan is single, and has $200 burning a hole in his pocket for date night.

Are you a Brooklyn resident? I work in Brooklyn, in Williamsburg, but I live in Queens. Born and raised in NYC.

What do you do? I got my idea for the delivery man from my job, Assistant Manager at a UPS Store.

Does your work know about the competition? My coworkers all know, the boss doesn’t. The coworkers were all supportive and helped me plan out my act. I don’t intend to tell my boss, as that could be a bit awkward, but should it come out there won’t be any major fallout.

How old are you? Just turned 27 three weeks ago.

Are you in a relationship? I’m currently Single.

So how did you find out about the competition? I saw an ad on Craigslist with the headline being ‘Looking For Less Endowed Men.’ A headline like that catches the eye, so I clicked on the link. 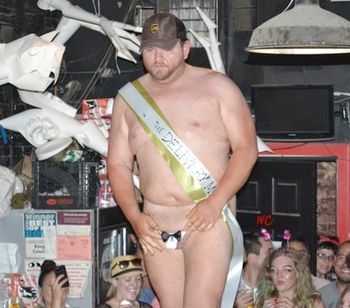 Were you nervous about entering? Not at all. Besides my day job I’ve been doing modeling and acting for the past 7 years. Acting is done in front of a group of people so I was comfortable there. And sometimes my modeling jobs are nude for art classes, so wearing some skimpy clothing wasn’t a problem either.

Half of the guys wore masks, but stood out and from the get-go were a crowd favorite—what can you say about that? I’m very confident in my body, so no need to wear a mask. As for being a crowd favorite from the start, that totally caught me by surprise. When I contacted Aimee and Bobbie from Kings County Bar and confirmed my attendance, I immediately began to plan my set. I looked at the contest as a fun and entertaining event and intended to put on a good show for the audience. Looks like my efforts were successful.

Did you have support team there with you (friends, girlfriend, family)? One of my friends and coworkers came with his girlfriend to show support. That was great of them.

But why would you enter such a contest in the first place? Honestly, I figured this sort of thing might never happen again. It looked like (and indeed turned out to be the case) a hell of a fun time. I know I had a blast, and it seemed like the crowd was into it also. I didn’t want to miss out on this opportunity.

Do you think that small dicks have a bad rep? Yes. That’s the media’s fault, I think. For both men and women, they push out images of people who just aren’t regular normal people. The size of a man’s penis does not matter for who he is as a person or in a relationship. Same thing with breast size. We’re all made in different shapes and sizes, but the media puts pressure on people to look a certain way. Most people do not look that way. Some people let that false sense of body image upset them and they shouldn’t be upset at all. Even worse, some people use those false standards and judge other people. It’s disconcerting.

What’s been you best experience regarding your small dick (sexually, otherwise) and your worst? I don’t think anything negative has happened to me regarding my penis size. Probably the most fun I have with my penis is that I’m a grower, not a shower, and when I’m with women I love seeing their reactions as it grows to double its flaccid size. They seem amazed by it.

Your answers to the judges questions were great—very positive and encouraging. Was that something that was important to you to convey? That was a goal of mine yes. I have a very positive body image of myself and it upsets when others do not.

Did you ever feel during the contest that this was happening at your expense or you were the butt of the joke? Not at all. The staff at King County Bar were all terrific and nice, always respectful. The crowd was great as well. Everyone seemed to just relax and have a bit of fun for the afternoon, which is good. [Editor’s Note: We agree.]

How did you celebrate? I actually went around the block to have a meal with a few of the girls who worked the event. We’d all been there for hours and it was very hot during the day. We found a nice place to grab a bite to eat and enjoy some air conditioning.

Did you get approached by any women after the contest? I was approached by quite a few, actually. Most wanted photos with me, which I was more than happy to oblige. Shortly after winning the contest one of the girls who worked the event came up on stage to kiss me. I thought it would be just a quick kiss on each cheek but no, that turned into a brief make out session. It’s good to be the winner.

What are you going to do with the $200? That was a nice little prize to win. I had just paid a few bills earlier in the week, so this prize money is going towards something fun for sure. Hopefully it gets used as date money on one of the girls I met last night. Again, it’s good to be the winner.

What kind of advice would you give to someone like you? Or your younger self? My advice for people like me is don’t worry about things you cannot control. All that does is waste time. Always move forward and do the best you can.

Contact the author of this article or email tips@gothamist.com with further questions, comments or tips.