Russian scientists at the Novosibirsk Institute of Medicine are claiming a beating on the naked buttocks with a cane is the perfect way to cure everything from depression to alcoholism. 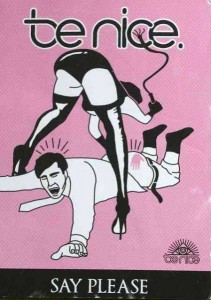 The researchers say caning releases endorphins, the body’s natural ‘happy chemicals’, and that leads to feelings of euphoria, a reduction of appetite, the release of sex hormones and an enhancement of the immune response, and they have a similar effect on pain as drugs such as morphine and codeine, but do not lead to addiction or dependence.

Biologist Dr Sergei Speransky who led the research claims corporal punishment, similar to that doled out regularly in British schools in the last century, helps people overcome addiction and depression. He confirms he is not a sadist even though he recommends caning and says the treatment works. A standard treatment course entails 30 sessions with 60 of the best, delivered on the buttocks by a person of average build.

Dr Marina Chuhrova who also took part in preparing the report said she had 10 patients she caned regularly and though initially “they didn’t like it, when they started to feel the benefits they kept asking for more.”

The Russian team says they are now charging for the caning sessions and are getting over U.S.$ 100 per patient for a standard treatment.